After gorging ourselves on sugary treats, fatty meats, and all of those other worldly vices on Fat Tuesday, another Lent is upon us.  And while Ash Wednesday is traditionally a day of fasting, it falls on February 14, the feast of Saint Valentine.  This year, I decided to take Susan to a place we haven’t dined at yet – CHE!!! in Delray Beach.  It is an Argentinian steakhouse with a beautiful location – right on the Intracoastal with a beautiful view of the water. 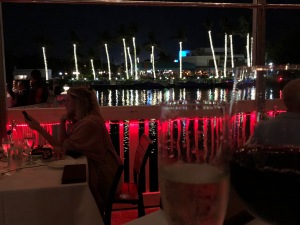 I’m a sucker for Argentinian skirt steak with chimichurri, and Susan had the filet mignon – both medium rare.

We split a side of garlic shrimp, to build our own surf ‘n’ turf dinners.

I don’t know what brunch is like where you live, but brunch here in South Florida is an event.  People get dressed up, make plans or reservations, take limos… here’s an example at one of my favorite hangouts, Salt7, and their weekly Sunday Funday event, “The Brunch”:

One thing that is a brunch staple – besides mimosas and Bloody Marys – is bacon.  Brunch without bacon is like… well… anything without bacon – infinitely worse.  But I found something in my refrigerator that was somewhat close:  sausage.  So my Sunday brunch (without leaving the house) consisted of champagne from yesterday’s Veuve Clicquot event, omelets, and sausage: 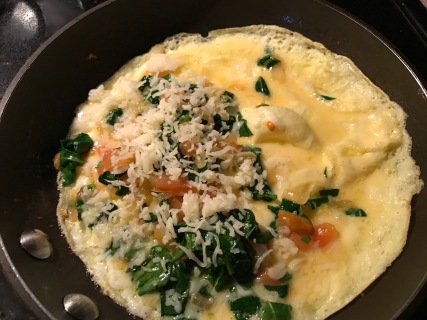 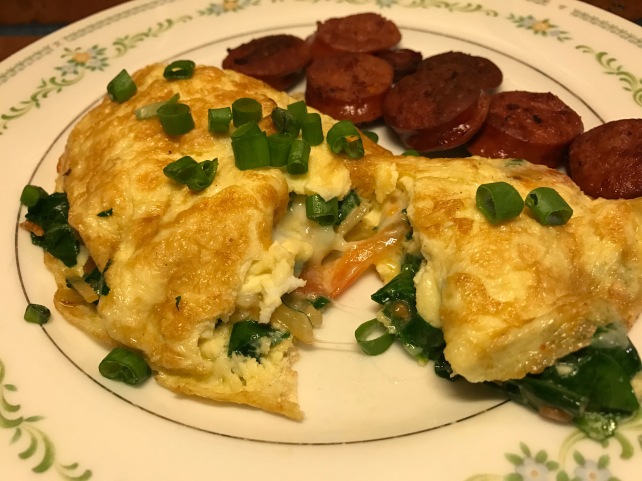 Sunday is also my “cheat day” from my newly-found lifestyle of working out and eating better.  (Funny how my bacon-free Lent coincided with my “eating better”, huh? )  So I decided to take Susan to this fairly-new restaurant, 1000 Degrees Neapolitan Pizzeria.  You can go pick your unlimited toppings and they fire up your pizza in a really hot oven – and your pizza is ready in two minutes.

When I got there, I saw their beer bar and thought, “Too bad I can’t drink beer, because I gave it up for Lent.”  (Yes, I gave up bacon and beer.)  Then I remembered – Sundays don’t count during Lent!  Oh glorious day!  So ended up ordering bacon on my pizza (along with Canadian bacon, since you don’t want to ignore the neighbors from the north).  Everything – for one meal – seems right in the world. 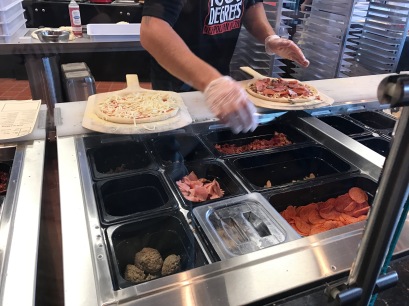 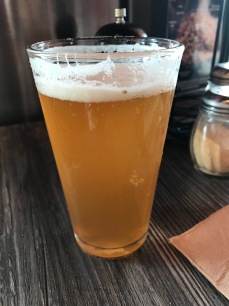 Today is the first Friday of Lent – that day where Catholics everywhere wonder where they are going to get a good meat-free lunch that won’t leave them empty and hungry for more.  This is the time when all the fast-food chains like McDonald’s, Burger King, and Wendy’s begin hawking their Filet-O-Fish, Big Fish, and Premium Cod Filet sandwiches respectively, but I wasn’t in the mood for fast food – I did that on Ash Wednesday.

That’s when I remembered my friend Rob always talks about the fish and chips at Miller’s Ale House.  So I hit I-95 South for the two-exit trip to Yamato Rd when I thought, “Wait… fish & chips are pub food – and there is a pub just one exit further, just off of Glades….”  So I ended up at Tilted Kilt Pub & Eatery. 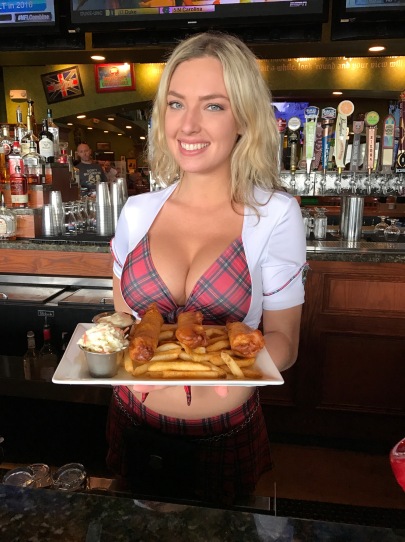 The menu describes TK’s Classic Fish & Chips as “Cod fillets hand-dipped in Samuel Adams Boston Lager® batter paired with fresh-made coleslaw & tartar sauce”.  When Paris came with the entree, I thought the fish looked more like egg rolls.  But once you break them open, the fish is fluffy, flaky, and moist, and the breading is light and not overpowering.  The coleslaw is crisp and crunchy; not too “mayonnaisey” like some slaw can be.  Finally the fries were savory and went well with the malt vinegar that is in abundance around the eatery. 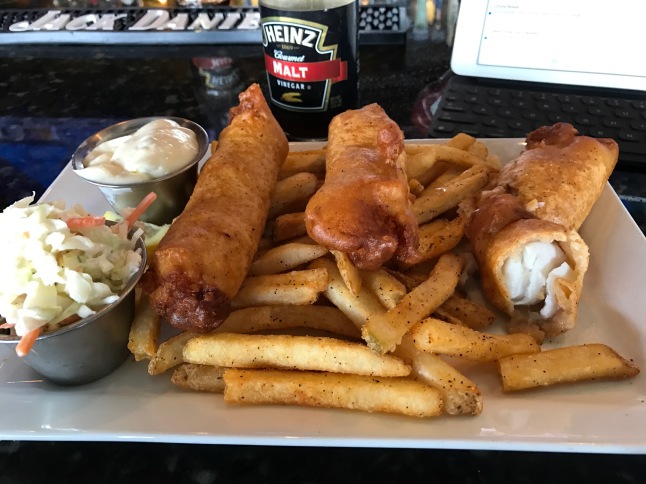 Overall, a fine choice for the first Friday of Lent – only 6 more to go until Easter Sunday, and LentWithoutBacon.com will be there every meal of the way.

It’s the first day of Lent. Some of you may have that Fat Tuesday hangover – sticky from King cakes and breath smelling of beer or vodka or wine or bourbon or whatever your D.O.C. (drink of choice) may be.  I, for one, am not looking forward to the next 46 days without bacon.

Then it hits me – today is a day of abstinence… no meat!  So what’s a carnivore to do?  Well, all good Catholics know the quick and (mostly) cheap way to adhere to their Lenten obligations – the good ol’ Filet-O-Fish.

Back in 1962, a McDonald’s franchise owner in Cincinnati noticed his sales go down on Fridays during Lent in his predominately Catholic neighborhood.  So he came up with the Filet-O-Fish, which was the first non-hamburger sandwich on the McDonald’s menu.  It spread across many McDonald’s restaurants in 1963, and went nationwide in 1965.  Since then it’s been a mainstay for Lent observers around the world.

Another Lent is upon us, so we did it up right this year.  Joined by friends Danielle and Rubén, I spent a week at Mardi Gras.  New Orleans’ version of Carnival fills the city and surrounding areas with weeks of parades, parties, music, food, drink, and all sorts of excess. 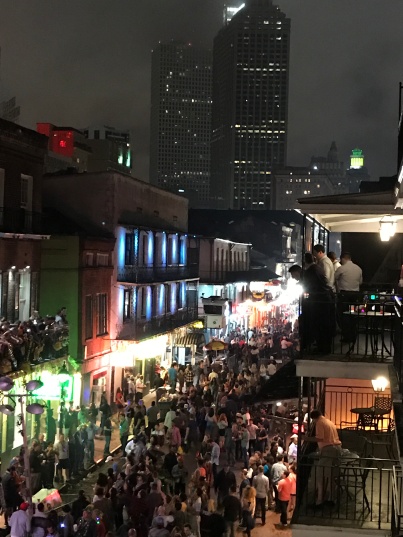 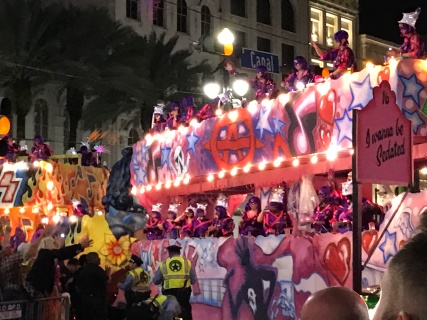 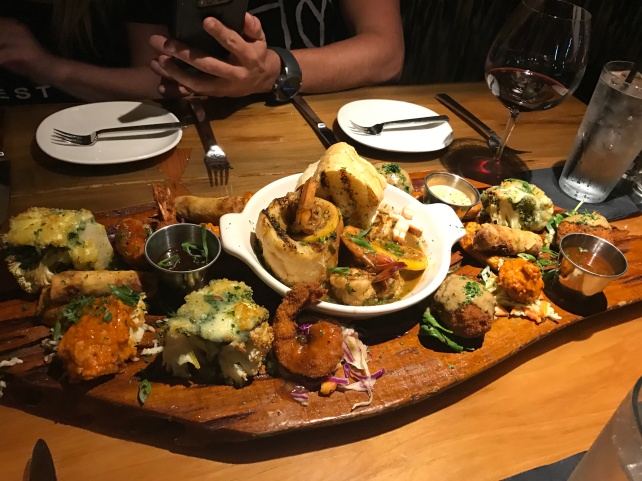 Carnival means “farewell to the flesh”, so Fat Tuesday is the last hurrah.  It is the day to indulge yourself in pleasure, since Ash Wednesday is the first day of Lent, a 46-day time of atonement and non-indulgence.  This is why Carnival season – and especially Fat Tuesday – is full on drinking, dancing, partying, and indulging in meats and sweets (such as King cake). 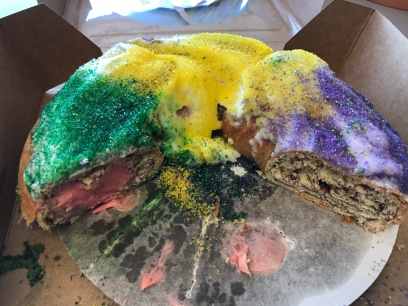 Since I give up bacon (and sometimes more) during Lent, I’ve decided to end Fat Tuesday enjoying something that pairs well with bacon – a fine bourbon.  Thanks to Larry & Christian for the bacon, Brooke & Josie for the bourbon, and Salt7 for the fantastic venue.  And last but not least, Angel’s Envy for making such a fine product.

Since I heard the festival was a sell-out on Saturday and that they may have temporarily run out of bacon, I decided to make some for breakfast before leaving the house.  Of course, I sliced up some of the best bacon in the world, Nueske’s Applewood-Smoked Bacon – sliced it up thick, of course.  Again, thanks to Larry from Salt7 for the Nueske’s bacon!

The festival gates opened at 1pm on Sunday, so we decided to get there a few minutes before to avoid the crowds.  Good thing we did, because there was already a line to get it – and a longer line at the ticket tables.  What do you wear to such an event?  Well, I went with a Christmas gift from my girlfriend’s brother-in-law Bobby – reminds me of the logo of the AMC television show Breaking Bad:

The first things we saw after walking in are buckets of peanuts at every table (nice touch) and the Fireball Whiskey booth.  We’d be returning to that booth… several times. 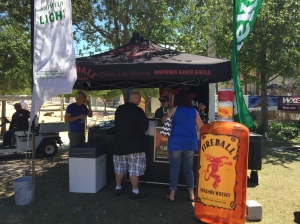 Because we heard the lines at the bars were long on Saturday, we decided to knock that out first.  Specialty cocktails were $8, and bourbons were $16 and $20. 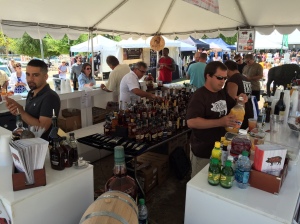 Next was the food.  The booths reminded me of Delray Beach’s Garlic Fest, but instead of garlic, everything had bacon. 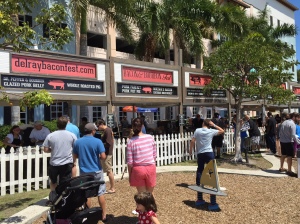 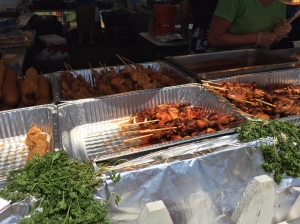 Entrees were all $12 – I started with the bacon-wrapped sausage: 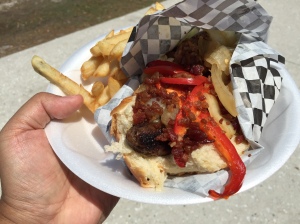 Time for another drink.  Instead of waiting in line at one of the main bars, I went to the Smoke Inn booth where they were serving up maple bacon old fashioneds.  When I got back to our table, I found that Javier just got a bacon parfait – that’s mashed potatoes and pork belly topped with gravy.  Looked good enough to eat! 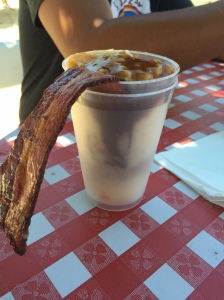 Now it was time to meet Cheryl from Nueske’s, the title sponsor of the festival.  She was attending with her friends Ann and Marjorie.  We also checked out the pig races – winner gets a small bottle of Fireball!  We decided not to wait in line to play… we just hit the Fireball booth again and paid for shots. 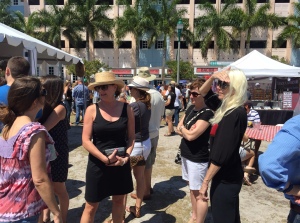 All-in-all, we thought Delray Beach’s first attempt at Bacon & Bourbon Fest was a fun time.  I think all the negative comments I read after the first day came from people who were denied entry because they didn’t purchase tickets online before the event.  Everything I read about the event said to buy tickets early, and that there would be a limited amount of tickets available at the gate.  So next year, buy your tickets online everyone!

Nothing says Sunday like brunch at Caffe Luna Rosa.  And every time I go to Luna Rosa, I order a side of bacon with my first drink – and it comes out within minutes.  This morning, I think we started with three orders of bacon:

I love this bacon.  I actually drove up from South Beach one morning just for the bacon.  Do you know what else I love at Luna?  Their bloody marys – they come with an antipasto salad on top!

They always have some great bunch specials at Luna Rosa!  This morning, I opted for the Lobster & Filet Mignon Benedict.  I mean, I don’t know how you can say no to that!  (unless you don’t eat meat)

The boys must have enjoyed their bacon appetizers, because they ordered more bacon with their meals!

Thank you Missy for the wonderful brunch!

No meat on Fridays?

How about Saturday breakfast steak?

Porterhouse and an egg

Every year, restaurants try to capitalize during Lent by coming up with a fish special for us that don’t eat meat on Lenten Fridays.  The fast-food chains are no exception.  So on this Friday, my girlfriend treated me by dropping off lunch between meetings.  She chose to drive through Burger King and pick up the Big Fish and Spicy Big Fish:

Got both the Big Fish and Spicy Big Fish for five dollars!

The Big Fish is 100% White Alaskan Pollock, breaded with crispy panko breading and topped with sweet tartar sauce, tangy pickles, all on top of a toasted brioche-style bun.  The Spicy Big Fish replaces the sweet tartar sauce with a creamy spicy sauce.  In my opinion, the Spicy Big Fish wasn’t that spicy – simply a bit spicier than the standard Big Fish.   I actually missed the taste of the tartar sauce – I guess I’m just used to it on these kind of sandwiches.

All-in-all, it was a good lunch – as good as it could be without meat.  And get this – the current Burger King promotion is “2 specialty sandwiches for $5″… can’t beat that!