It’s the first day of Lent, yo.  Maybe you ended up here because you decided to do something crazy like give up bacon for Lent.  Or maybe you just want to see what kind of fool would do so.  Either way… welcome!

I started this blog last year as a distraction to the craving for that savory meat candy.  I talked about what I would eat for breakfast, and how to substitute something lesser like sausage or ham for our favorite of breakfast meats.

I also featured a lot of non-bacon options, especially all those crazy fish sandwiches the fast food giants try to cram down our throats every Friday of Lent.  You can’t have any fried, cured pork belly, so why not have some fried processed fish?  C’mon man.

So if you really decided to give up bacon for Lent, I hope you went out with a bang.  Yesterday was Fat Tuesday – the day when people gorge on sweets, fatty foods, liquor, and other bad stuff before taking 40 days off to purify the body and soul in an attempt to bring you closer to Jesus.  Yeah, right – no way anyone can compare giving up [FILL IN THE BLANK] to what Jesus went through, but it sure makes us feel a little better about ourselves, right?  🙂

Yesterday started out like any other Fat Tuesday – I dug into a King cake, which is a deliciously sugary Mardi Gras confection. 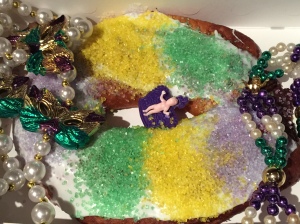 That’s a plastic baby Jesus in the middle….

Later on in the day, I realized, “Tomorrow I need to give something up for Lent”, and panicked… for I had at least half a package of delicious Smithfield Thick Cut Bacon in the fridge which I did not want to go to waste.  So I immediately threw it on the griddle. 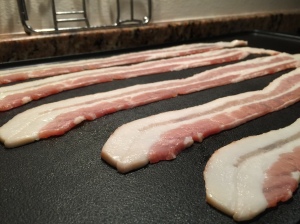 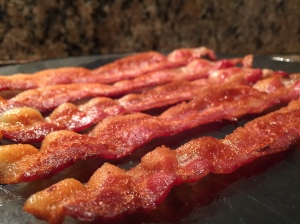 It was late last night and I was a little drunk… and again it was late last night, so I didn’t really now what to do with the bacon.  I had already eaten dinner, so only thing left to do was eat dessert.  And then it came to me – I had some King cake left, so what else would come to mind?  Bacon, King cake, and ice cream. 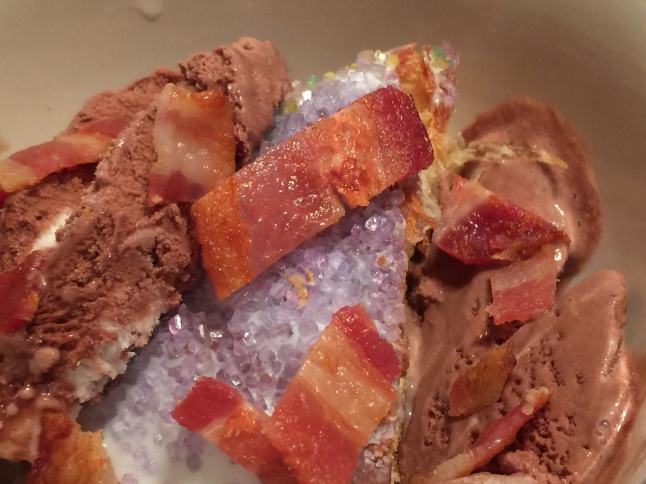 That would be Heavenly Hash ice cream with the King cake, sprinkled with chunks of bacon.  Yes, I did that.  I hope you went out with a bang like I did!

One thought on “First Day of Lent – Ash Wednesday”